Transformation: What Playing With Toys Taught Me About Jesus 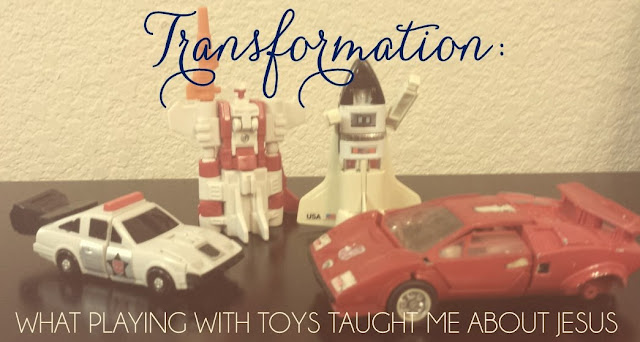 I’ve been surrounded by boys my entire life. I grew up in a house full of them, then went on to marry and have a son. Through this experience, my life has become saturated with all things male: namely Transformers.

My brothers all had them. My son has them. And, a couple of years ago, my in-laws mailed us a huge box of Transformers that used to belong to my husband.

I’ve seen every Transformers movie, and can tell you the difference between an Autobot and a Decepticon. I quote Optimus Prime, and have been known to shout “Hey, look! It’s Bumblebee!” as we drive by a yellow Camaro.

Despite my decades-long experience with Transformers, I still have one problem. I can’t actually get them to transform. I mean, CANNOT.  Optimus is half himself, half semi-truck. Ratchet isn’t quite fully an ambulance. Megatron—well, he’s missing some pieces. Getting them to change into their intended shape has always eluded me. Even the ones that come in a Happy Meal.

Despite all of this, I never did quit trying to alter these complex figures. I could get them part of the way, then I’d either break off a piece, or give up and ask someone else to finish the transformation. I have no idea why this concept escapes me, but it truly does.

The other day, I was reminded that transformation is something I struggled with early on in my walk with Christ. And I still do sometimes.

As a new Christ follower, I held tightly to some beliefs and opinions that weren’t biblical: I maintained a pro-choice stance into my late twenties. I hated my enemies. I withheld forgiveness. I was openly hostile. I gossiped.

When I began to read the Bible, and to take Jesus’ words as more than mere suggestions, I realized that my opinions didn’t line up with His teachings. And, if I took Jesus seriously, my heart was going to need a major overhaul. A transformation.

Much like the Transformers that have littered many a family room floor, I began to change little by little. Often, it wasn’t pretty. Tears were shed. Pieces broke off when I tried to bend them the wrong way; when parts of who I was before didn’t match who I was supposed to be. I was trying to be me, but Jesus had a better plan.
2 Corinthians 5:17 spoke to me about who I was before, and who God was shaping me to be:

“Therefore, if anyone is in Christ, he is a new creation. The old has passed away; behold the new has come.”

This thought occurred to me: “If I believe Jesus is who He says He is, then I am who He says I am.”

I was turning into His new creation. The old stuff—the opinions, beliefs, and misconceptions. Those weren’t Jesus. Those were me. The new creation, without the extra parts and pieces, was beginning to take shape.

I would like to tell you transformation in Christ is short and easy, but it isn’t. Sometimes your heart will line up with Jesus, but it won’t line up with your best friend. Or your cousin. Or even your grandma. I can guarantee you’ll start to fight with yourself. You’ll be trying to keep a part you like, when Jesus is trying to shape it into something new. Something better. You may even say “I know this is what you want, but I refuse to change.” That’s okay, Jesus is patient. He’ll wait for you. He’ll help you bend the pieces into their correct places.

If you’re in this stage of transformation, I get you. It’s not easy to let God work on your heart. Sometimes it takes years to let go of pride, or arrogance, or a sinful relationship. Mostly, it’s tough to let go of who we are and let Jesus run our hearts. But I promise it’s worth it. 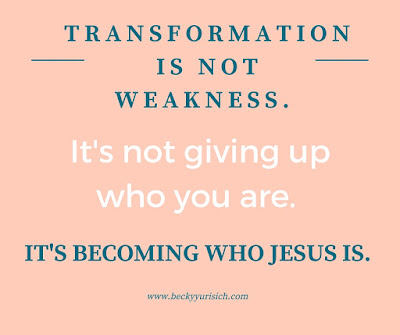 As someone who thought she would cling to her beliefs until she died, I hope these words encourage you. Transformation is not weakness. It’s not giving up who you are. It’s becoming who Jesus is. Seek strength from Him. He will give it to you.

I'd also like to tell you that the inner struggle that often accompanies these changes is only temporary, but I'd be lying, and lying isn't my thing. God is constantly working on my heart, and showing me new ways to change. Some changes are easier than others. Sometimes I still throw a fit. But He remains steadfast, never leaving me, never giving up. Always making sure the transformation brings me one step closer to Him.


If you have struggled with transformation after becoming a Christ Follower, I would love to hear from you! How has Jesus changed your heart? Leave a comment below!
Posted by Becky Yurisich at 12:05 PM